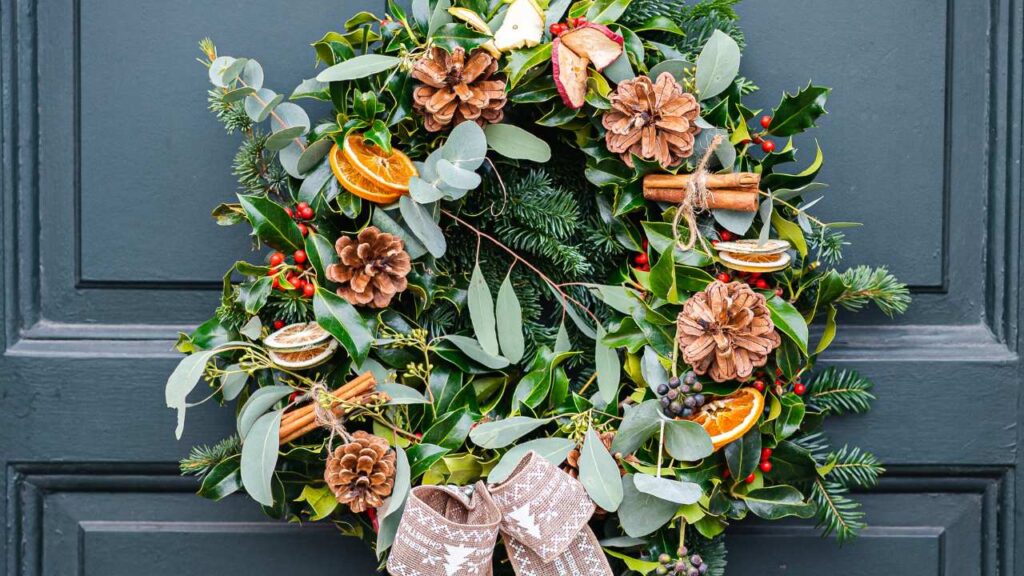 The Origins of the Christmas Wreath

Here at Oasis Florists, Christmas Wreaths are a huge part of our festive range. Kicking off the season, our beautiful handmade and decorated wreaths symbolise, for us, the beginning of Christmas. On that note, here’s a little insight into the varied and fascinating origins of the humble Christmas wreath.

The Origins Of The Christmas Wreath

The origins of the Christmas Wreath began in Roman times, and they hang wreaths on their doors as signs of victory and status. Women were known to wear wreaths as headdresses, they indicated symbols of pride, and this tradition is still being used today during the Olympic Games, where the medals are engraved with sprigs of laurel.

“The tree gave birth to the wreath” – states Ace Collins, the author of “Stories Behind the Great Traditions of Christmas.

A Christmas Wreath is more than just a decoration and the rich history attached to these beautiful decorations has yet to be discovered by many folk.

The custom of bringing a Christmas Tree into the home during this ancient period involved trimming off some of the limbs to make the tree fit into the home and to make it more symmetrical and tidy. The Christmas Tree also represented the Trinity and the Catholic legend that Saint Boniface, a monk from England used the three parts of an evergreen tree to explain the concept of God The Father, God The Son and God The Holy Ghost back in the seventh century. Many years ago, people never threw anything away and this tradition grew henceforth.

Christians in Europe often placed a candle on the wreath during Advent which indicated the “light” that Jesus brought into the world.

The word “wreath” comes from an old English word “writhen” which means to twist or writhe and despite its popularity now, the wreath started with very humble beginnings. Today, sadly, we live in a throwaway society, but many years ago everything was used and the trimmings of the Christmas tree were made into a wheel-like shape as it was simple to hang. The shape also represents:

Our beautiful Natural Christmas wreaths are made by twisting and bending the branches into a circle and are then decorated with pinecones, Irish Nobilis Fir and Holly base, with mixed foliage, berries, dried fruits, cinnamon sticks and a rustic bow. 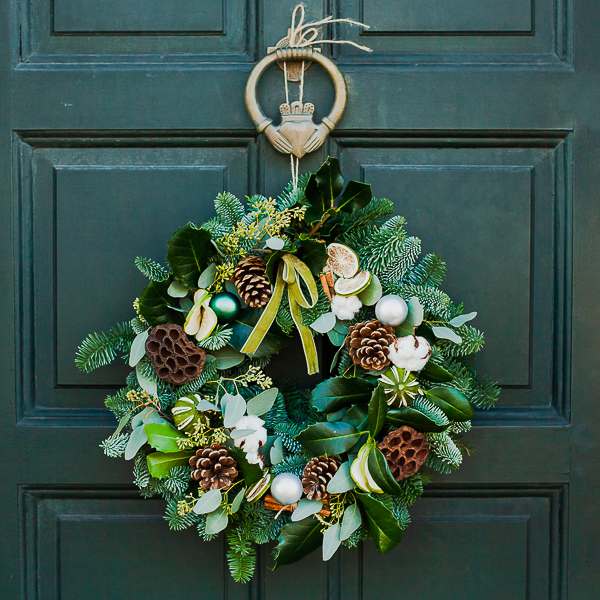 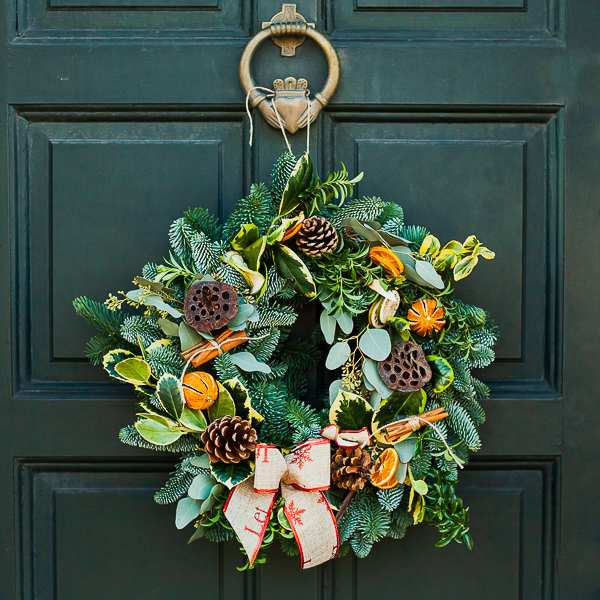 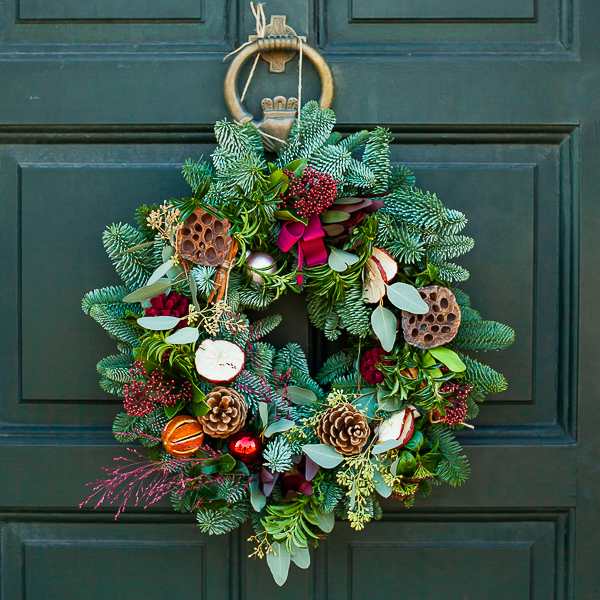 A little history on wreath decorations.

Why are pine cones associated with Christmas wreaths?

Pine cones represent the all-seeing third eye which is known to have the power to consider beyond the ordinary. They are also seen as symbols of light and illumination in the Christian faith.

Why is cinnamon associated with Christmas wreaths?

Cinnamon dates back to medieval times and was used as a preservative due to its strong smell. During celebrations such as Christmas there needed to be an abundance of cinnamon hence its use in a wreath.

Why are berries used in a Christmas wreath?

Berries are represented in a Christmas wreath to symbolise drops of blood from the crown of thorns that Christ wore on the cross – as holly has such sharp and pointed leaves they are believed to have pierced the skin.

The origins of the circular shape of a wreath are made to represent Christ’s eternal love, strength and creation of new life. As an evergreen is such a strong tree and survives in harsh conditions throughout the winter, we believe this is why they were used, plus the symbols of power, resilience and hope.

In Catholic and Pagan traditions, Christmas wreaths had four candles which represented:

Traditionally the four Sundays before Christmas, known as Advent, the candles on the wreath were lit daily at dinner with prayers. The candles also illustrated the elements of Earth, Wind, Fire and Water and the wreaths were often used in rituals that would ensure the circle of life would continue. At times, a white candle was lit on Christmas eve and welcomed the birth of Jesus.

Johann Hinrich Wichern was a German Lutheran pastor who was given praise for turning the wreath into a symbol of Advent and the lighting of different sizes and colours of candles as Christmas became closer.

Traditionally the Advent wreath was adopted by the masses in the 19th century, plus many other Christmas traditions – from the marriage of Queen Victoria in Great Britain to Prince Albert in Germany, these wonderful traditions became popular and still are to this day.

Christmas wreaths are a beautiful decoration for your home and spreading the holiday and Christmas cheer is a wonderful thing to do plus the history is fascinating.

Our range of seasonal wreaths is available in the Christmas section of our website HERE and are available for collection from our Terenure store or delivery throughout Dublin this December. Stocks are limited so order yours today or pop by and check out our lovely selection of wreaths, gifts and plants!